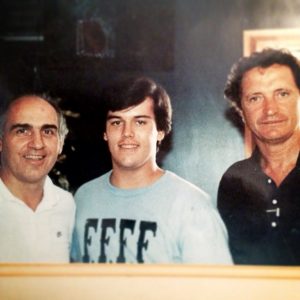 The Wit & Wisdom Of Al Mcguire

Make sure to subscribe to our newsletter and be the first to know the news.

Small Business Edge provides advice and insights to guide small business owners and startup businesses in uncertain times. Whether it is about cash flow, remote working, credit, bankruptcy, employees, getting a loan, or dealing with stress and time management issues, when entrepreneurs have questions, they get answers on SmallBusinessEdge.com

The Wit & Wisdom Of Al Mcguire

The summer prior to my freshman year at Marquette University, I worked in my uncle’s bar & restaurant in Rockaway, NY. One day, a crew from WNBC-NY walked in to have lunch. They were in town filming a segment for an upcoming show about a college basketball legend. Almost on cue, into the bar walked Al McGuire, one of the greatest coaches in men’s college basketball. Al grew up in Rockaway and was back with NBC to trace his roots (my uncle’s bar was across the street from the famous 108th street basketball courts where players such as Lew Alcindor, Brian Winters, Len Elmore & the McGuire brothers tore it up every summer).

When I told him I was going to Marquette, Al’s face lit up. He spent almost an hour with me telling me all the wonderful things about the school. What I remember most is the laughter and him stressing the importance of getting a good Jesuit education.

For all of the talented players who went through Al’s program, his great wins, and ultimately his capturing the NCAA Championship in 1977 (in his last game ever as a coach), Al McGuire will be remembered most for his incredible wit.

He was a rare combination of humor, sarcasm, sincerity, intelligence, intensity, fairness and compassion. Recently, I came across a book which included some of Al’s best quotes (from A to Z). Below are some of my favorites. Enjoy!

DINING – I went into a restaurant one night and ordered lobster, and the waiter brought me one with a claw missing. I called him over and told him about it. He told me that in the back there’s a tank they keep lobsters in and, while in there, they fight and sometimes one loses a claw. I told him, “then bring me the winner.”

MOTTOS – (1) Live every day as if it were Saturday night. (2) Dream big. Don’t be just another guy going down the street and going nowhere. (3) Live in the moment that you are in. Make your life exciting. Do what you have to do as long as you don’t hurt people.

NEW YORK – I come from New York where, if you fall down, someone will pick you up by your wallet.

PERSONALITY – A team should be an extension of a coaches personality. My teams are arrogant and obnoxious.

QUICKNESS – Dean Meminger was quicker than 11:15 Mass at a seaside resort.

RECRUITING – My rule was I wouldn’t recruit a kid if he had grass in front of his house. That’s not my world. My world has a cracked sidewalk.

EXIT – I had my moment on the stage. The trick in life is to know when to leave.

Prior to rejoining the world of entrepreneurship, Brian was the Executive Director of Sales Development at the Wall Street Journal where he oversaw the sales development and marketing programs for the financial and small business categories among the many Journal brands. From 2002-2010, Brian was President of Veracle Media and Moran Media Group.

All fields are mandatory